Through a partnership with the Agriculture Insurance Consortium (AIC) – M-Omulimisa provides highly subsidized agricultural insurance through our network of agents. AIC is a consortium of insurance companies providing subsidized (up to 50%) agriculture insurance under the Uganda Agricultural Insurance Scheme (UAIS) a Public-Private Partnership (PPP) arrangement with the Uganda Insurers Association (UIA) and the government of Uganda.

The service is commission-based and works through a network of agents. The more insurance policies the agents sell, the more money they make in earned commission. The commission helps agents meet their operational costs and provides an incentive for enhancing the service.

By making the service accessible via mobile phone, we make it easy for any farmer anywhere in Uganda to access insurance when they want it. The service is available through USSD – *217*101#, Mobile App (magrosure), and via our website. We integrate mobile money to make it easy for farmers to pay for agriculture insurance as well as receive compensation at the end of the season if they incur a loss due to weather-related hazards.

Who can become an Agent? 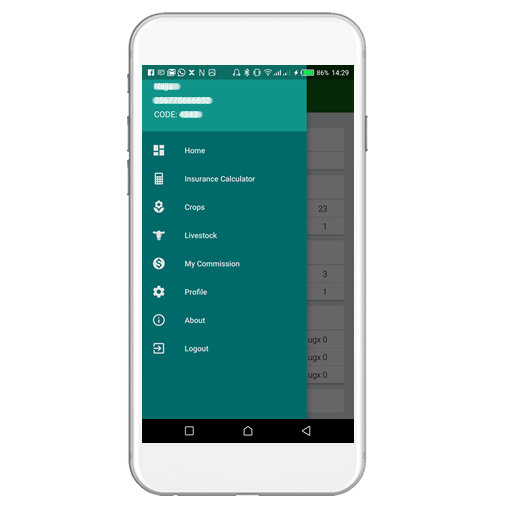 Harvested Crops and Crops in transit; Any Crop which has been harvested prior to inspection by our loss assessor; A result of consequential loss whether or not caused by a defined peril. Where recognized good farming and harvesting practices have not been followed; Controllable diseases, weeds, and/or controllable insect infestations

The APH is usually set per crop and Unit Area of Insurance (UAI). UAI is a geographical area comprising one or more unit(s) which can either be government boundaries such as provinces/ districts/ villages or Agroecological Zones (AEZs) derived from remote sensing/satellite data using machine learning technology. An AEZ is a geographical area that exhibits similar climatic conditions influenced by variables such as historical precipitation, temperature, soil moisture, and crop yields. In this note, AEZs were the chosen Unit Area of Insurance.

At the end of the season, trained enumerators measure yield levels for each AEZ via a method known as crop cutting experiments (see Appendix 2). This process involves measuring the harvest of sampled representative farmers. If the yields measured on the sampled farms are lower than the historical benchmark, then all the insured farmers in that area are paid.

The scale of the pay-outs is dependent on parameters such as the Trigger, Exit, and Total Sum Insured (TSI) at the exit. Whereby:

Losses or damage arising directly or indirectly from any of the following are not covered: